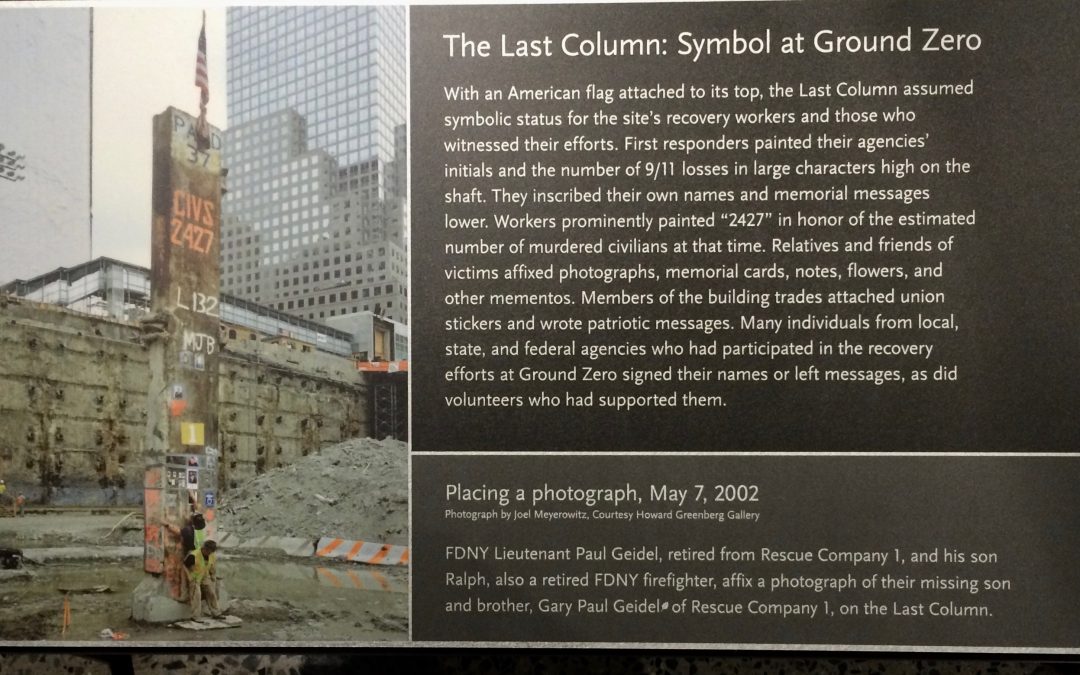 We Must Never Forget!

Who doesn’t remember where you were and what you were doing on that fateful day of September 11, 2001? No American should ever forget that horrific event. As a nation, it shook us to our core, but it united us in a way that it seems only wicked occurrences do. I don’t think that the people of our nation had bonded together like we did since the Japanese bombed Pearl Harbor in1941. At least for a little while, we were a praying and unified country. It was the good that came out of the ugly.

I had the opportunity to visit the September 11 Memorial in May of 2015. I’d gone to Albany, New York, to attend the Boozefighters National Convention. When I owned Johnny’s Bar & Grill in Hollister, I became very close to the motorcycle club that was at my historic bar in 1947 during the so-called motorcycle riots. They were the most generous bunch of people, and they treated me like royalty at their gatherings back then.

I figured if I was flying all the way across the country, I needed to make it a point to see the 9/11 Memorial. I’d asked around for someone to join me but found no takers. The employees at the Holiday Inn described the trip from the hotel in Albany to the Memorial as not a big deal. Let me say that the assessment couldn’t have been further from the truth.

The hotel shuttle service dropped me off at a bus stop with instructions about which bus I should board that would take me to another bus, which would take me to the train, that would take me to the subway, and then to the Memorial. I’d long conquered my phobia of going places alone, but this was an adventure of astronomical proportions. I somehow managed to find the right buses and made it to the train station. Once there, I relaxed a bit. The ticket salesperson told me to get off the train at Grand Central Station and gave me instructions about purchasing my ticket for the subway. She said I’d know where to get off once on it because the conductor would announce the 9/11 Memorial stop. Easy, peasy, right? Not hardly, but it’s much too long of a story to get into. Suffice it to say that by the grace of God, I made it to the Memorial.

If you have never seen the 9/11 Memorial and Museum up close and personal, there is no describing it. At least not in a way that conveys the purely emotional experience. In the bowels of what was left of the Twin Towers, seven stories below the Memorial, is the main exhibit. You see first-hand the devastation, the twisted metal, Ladder Company 3’s demolished fire truck, and what once were stairways that terrified people scrambled down to escape the horror. The museum is full of artifacts and stories from survivors, first responders, residents, and eyewitnesses. Interactive displays and a memorial exhibition honor all those that lost their lives. It is the most powerfully moving exhibit I have or ever will see.

You come out of the cavernous museum to the Memorial’s twin reflecting pools, which are each nearly an acre in size and feature the largest man-made waterfalls in North America. The almost 3,000 names of the men, women and children killed in the attacks of September 11, 2001, and February 26, 1993, at the World Trade Center are inscribed on bronze parapets surrounding the twin memorial pools. I couldn’t help rubbing my hands over the names. I may not have known any of those people, but their loss and the holes they left in family members’ hearts were palpable.

I’m so glad that I got to experience the Memorial, but I won’t be making that trek again. I have no desire to return to New York, but please don’t miss seeing the Memorial if you find yourself there. It is historical, somber, emotional, and inspiring.

I want to finish up on a lighter note. There is a bit too much gloom going around right now. To say that my return trip, which included a subway ride in New York at 5:30 in the evening, was harrowing would be an understatement. I still haven’t conquered my claustrophobia. Let’s just say that if you suffer from the same affliction, the last place you want to be is on a New York subway at rush hour. I’m pretty sure that there is no limit to the passengers allowed in each car, as long as they can close the doors. I wound up wrapping myself around a pole right next to one of the doors and holding on for dear life.

The fear I was feeling was evidently easy to perceive. I met the nicest people who showed genuine concern and did their best to ease my hysteria. One lovely lady talked calmly to me and asked me questions about myself to distract me for most of the ride. When she got off, she told me that I only had four more stops before mine and continued to talk to me like a mother would to a frightened child. The gentleman standing next to me told her that he was getting off at my stop and would be sure to assist me. I’ve heard tales about New Yorkers being mean and self-absorbed, but the folks I met were terrific.

Not only did the man get me off of the subway at the right stop, but he made sure that I got on the correct train to head back to Albany. From there, I was supposed to take two buses once again and then hail a shuttle back to my hotel. That was not happening! The visit to the Memorial was emotionally draining, and the subway and train expeditions polished me off. I called a cab and was driven right to the door of my hotel at a very hefty price.

I have checked a visit to New York and the 9/11 Memorial off of my bucket list. Can I suggest that if you do the same, don’t do it alone? Take a friend or a family member. Heck, take an ex-wife or ex-husband. Just take somebody with you.

Let’s all say a prayer for the nearly 3000 names etched on the Memorial and for all of the families that lost loved ones that day. Many first responders have suffered illnesses and even died well after the incident because of its health issues. Let’s pray for all of them too. While talking to The Man Upstairs, let’s also pray for our hard-working firefighters and men and women in blue who risk their lives for us every day. God bless them all.