On the Road Again! Travel Tales 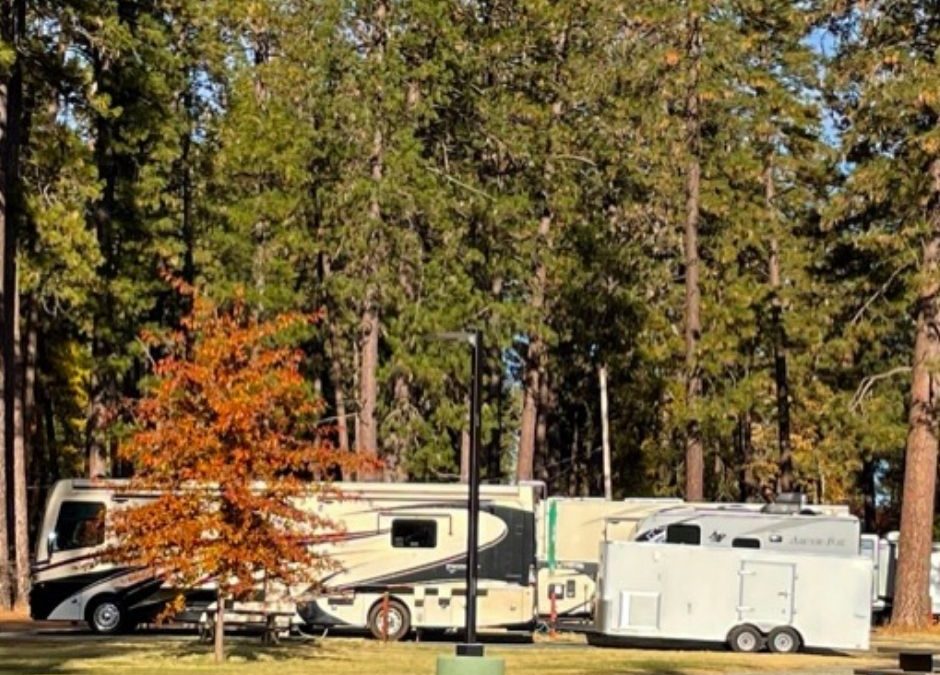 After spending almost seven months getting our new home settled in Shingletown, California, we are finally back on the road. We are officially retired, glamping, snowbirds. In Hollister, we were blessed with some pretty fabulous weather, and I am a cold-wimp. I do not like being chilly. Last week the temperatures dropped so quickly that it even took the folks who lived in Shingletown for decades by surprise. I was wearing shorts and a tank top on my walks one day and bundled up in layers including, gloves and a beanie the next. Did I say that I don’t like the cold?

We’d initially planned on starting our road trip after Thanksgiving. However, we decided to hit the road early and head to warmer climates. Escaping California and our tyrannical governor Newscum was a bonus to our early exit. Sadly, the election proved that there are still too many people in California who vote for the same worthless government officials repeatedly. I told Tommy that if Pelosi and Waters were re-elected, we were leaving California for good. Enough about politics. This is a travel story.

God blessed us once again with excellent house sitters so that we can relax and enjoy our four-month snowbird escape. We are going to put our Thousand Trails membership to good use. I was a bit tired of the drive south on I-5 and suggested that since we were leaving early, we head east and visit our pals in Grass Valley on the way out of California. God blessed us with the best travel weather that we could have hoped for. Tommy did not want to drive our 40-foot motorhome towing our 20-foot trailer with my car in it over any ice and snow. I didn’t blame him one bit. When we left Shingletown on Thursday morning, it was cold but sunny. The drive to Grass Valley was scenic and dry.

We hadn’t seen our good pals Betty and Phil since we visited them at their home in Tennessee during our cross-country trip last year. Yes, believe it or not, they left California for Tennessee and then returned when the humidity was too much for Phil. Now he is ready to leave the state once again. Retiring in the crazy, expensive state of California is not a sensible option. For now, they have a beautiful home on two wooded acres. We had a pleasant visit with them, and our stay at the Nevada County Fairgrounds RV Park was pleasant. The park has a small man-made lake, and despite being close to the highway, it was quiet and tranquil. It was reasonably priced, and we had full hookups. We clampers love full hookups. Throw in a lake for me to walk around to get in my 10,000 steps a day, and I’m a happy camper.

We are headed to Las Vegas to see some friends that escaped California and have a wonderful new home there. We try not to drive more than 250 miles in a stretch to avoid cranky situations, but there wasn’t much in the way of RV parks between Grass Valley, California, and Vegas. I found an RV park in Hawthorne, Nevada, that was great for a stop-over.

The Whiskey Flat’s RV Park is right on Hwy-95, but surprisingly quiet. The receptionist was friendly, and the price was very reasonable. She advised us that the park would be full and that the internet would be slow if lots of folks were using it. Sure enough, we watched the place fill up, and by the time I made my walk around the area, getting my daily steps in isn’t easy on travel days; there were only four spots left. On my walks around campgrounds, I always enjoy checking out license plates to see where people are from. This park had lots of Nevada plates, but Idaho, Texas, Colorado, Utah, Oregon, Montana, and California were represented there.

It’s great being back on the road in our motorhome. We all missed it, maybe Paddy most of all. Our fur baby has been so lovable since we hit the road. He’s back to sleeping with us at night, something he only did only twice in the months we lived in the house, and sitting on our laps in the morning and evenings when we are in our recliners. He rolls all over the tile floors when I extend the pop-outs before I roll out our rugs. I was hoping to attach a video of him because it’s so darn adorable. He looks SO happy while he’s doing it. I couldn’t seem to drop it in but you can see it on YouTube here: https://youtu.be/ML9ZMPP9N_g

It was nice taking a different route, even though there was very little to see on the hundreds of miles on US-95. Fair warning, if you are traveling between Reno and Vegas, fill your tank before heading out. There was a gas station in Hawthorne, but Tommy thought that Tonopah was closer than it actually was, so we didn’t fuel up there. That led to some extra stress on our journey. When I brought up the fuel subject, and Tommy expressed that he “hoped” we had enough to make it, I was a bit concerned. I found it comical that unbeknownst to each other, we were praying constantly and fervently that we would make it to town without running out of fuel. Once in Tonopah, panic struck when we were almost out of town before we spotted a gas station that we could get the rig into. I’d seen a Texaco sign that said truck stop, and there were plenty of trucks parked at the back of the enormous parking lot, but we didn’t see diesel pumps for trucks. Thankfully, a trucker was walking by, and Tommy asked him where we could get fuel. The two diesel dispensers for trucks are not easily seen, but thank God they were there. The Texaco was the last fueling station for 94 miles, and we would not have made it that far. Tommy never waits until the tank is empty to fuel up. We’ve made two cross-country trips in Buford, that’s our motorhome’s name, and have never added more than 75 gallons of diesel. We put $250.00 in the tank, which got us almost 90 gallons. We have a 100-gallon tank, and despite the gauge reading full with $250.00, we don’t know exactly how close we came to running out. We have vowed never to let that happen again.

Our third stop was Pahrump, Nevada’s, Lakeside Casino, and RV Park. I’m thrilled to have booked a two-night stay here because not only is it gorgeous, but after the LONG drive here, we needed a couple of days to unwind. HWY-95 is well paved, and the inclines and declines are so gradual that you don’t even realize that you’ve climbed or descended thousands of feet. It was strange to be looking at nothing but desert, sand, cactuses and then see a sign that tells you the elevation is over 6800 feet. Throw in the many designated areas for putting chains on your tires, and it seems surreal. God’s traveling mercies continue to amaze us. It’s almost December, and we managed to miss snowfall. When we arrived in Pahrump, it was a balmy 70 degrees. We passed many RV parks on the way to the one I’d picked, and Tommy was sick of driving, so he started to give me a hard time. I was beginning to think that I’d blown it until I saw this beautiful park. It is situated around a man-made lake. It’s a five-star park but very reasonably priced. It’s as clean as can be, has many trees, and even the full-timers take great care of their spots. I haven’t seen the casino because I can’t wear a face mask. With my claustrophobia, two minutes with a mask on is sheer torture.

I love to gamble, but not enough to endure a mask. Tommy checked the casino out and found it unbearable. He said there was a mask-Nazi working the place. People can pull their masks down to smoke or drink but must immediately put it back over their faces. His glasses kept fogging up so he couldn’t see, and when he mentioned it to the mask-cop, she told him to put shaving cream on them. He asked her if she had any, and she told him no. He said that the smoke was terrible, and he came back smelling like an ashtray after only a short visit. COVID is going to wind up saving us money. If Las Vegas rules are the same as they are here, I won’t be leaving any cash at their casinos either. How is it okay to let people take off their masks to blow cigarette smoke in the air but force you to keep one on while enjoying a beverage?

Today’s drive is a short one to the Las Vegas Thousand Trails. We are excited to see our friends and their new home. I thought that we had to check out on Thanksgiving Day, but come to find out, I’d confused my days of the week. Thankfully, I’d booked the correct dates moving forward. I had a panic attack when I thought I’d messed everything up. I use the RV Wizard app, and I swear by it. If I had looked closely at the days and not just the dates, I could have skipped some scary moments. It’s an excellent application for tracking your trip, including fuel stops, so that you know how far you’ve been, how far it is to where you are headed next, and when you should stop for fuel. You can name your trips, and they are saved on the app so you can look back and at them. It’s a great way to remember where you went and how you got there.

I plan to share our travel tales regularly. If you know someone that is RVing or is interested in doing it, be sure to share my blog posts and invite them to join my Facebook group, RV Road Trip with Tom, Cat & Paddy. I’ll share lots of tips and reviews about parks and travel and updates about mask requirements and other Rona BS. Sorry, but I think these lockdowns and forced behaviors are doing more harm to our countryman and our economy than the disease itself. With a recovery rate of over 99% and an at-risk group easily identified, the pandemic has been blown way out of proportion. This is my personal opinion. Don’t get mad at me if you disagree, and I’ll promise not to be mad at you if you believe masks are called for. One of the great things about America has been the right to voice your opinion. Sadly, that right has been eroding, and the censorship we’re currently experiencing is a threat to life as we know it.

So sorry, there I go with politics again. It’s hard to avoid it in these crazy times. I am so grateful for our health, and our families, and our home on the road. We are more blessed than I can say. I believe that the only way to get through these turbulent and scary times is to remember your blessings, pray regularly, help others whenever you can, and be grateful.

Happy trails and God bless you all.